Our colleagues at CNET.com interviewed several customers of the Tesla car brand who chose to cancel their order or not renew their long-term rental because of Elon Musk’s attitude.

For Heather, the straw that broke the camel’s back was Elon Musk’s virulent attacks on Anthony Fauci, one of the world’s most respected immunologists and the outgoing director of the National Institute of Allergy and Infectious Diseases in the United States. UNITED STATES. For Logan, it was when the billionaire, days after taking over Twitter, ordered employees to stop paying supplier bills. For Tom, it is also Elon Musk’s erratic management of Twitter that is unacceptable.

And when each of them called to cancel their Tesla pre-order or to terminate their rental agreement, explaining that the tycoon’s behavior was behind their decision, the salesman on the other end of the line told them. answered pretty much the same thing: We hear that a lot. »

After two months at the head of Twitter since its acquisition for 44 billion dollars, Elon Musk has caused trouble with his brutal managerial methods and his erratic decisions which cast doubts on the future of the social network. It would seem that this negative image is beginning to rub off on the other companies for which he is responsible, namely Tesla and SpaceX.

On Sunday, the big boss launched a poll asking his base if he should leave his position as CEO of Twitter. 57% of the 17.5 million participants answered in the affirmative. Elon Musk said he would abide by the vote, without giving further details on the timing of his departure. 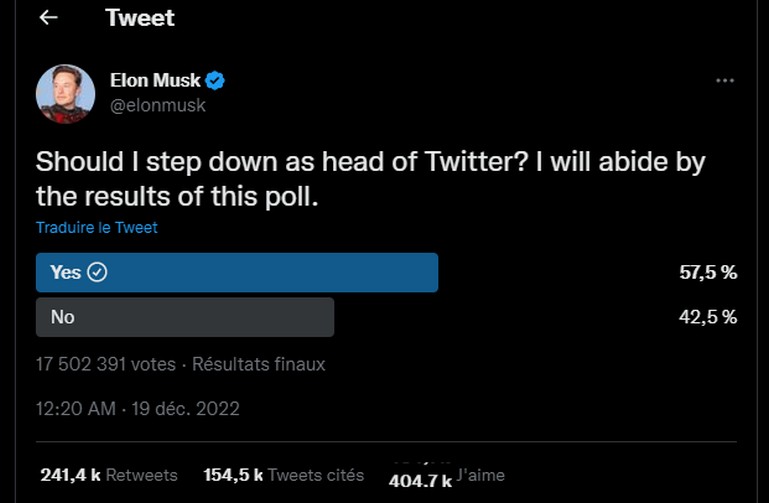 One thing is certain, investors do not really appreciate this period. Tesla stock has fallen more than 33% since the Twitter acquisition was completed on Oct. 27. Elon Musk reportedly assigned engineers from the automaker to take emergency action on Twitter after he fired half of the social network’s employees without notice a week after taking over. Major advertisers, who account for nearly 90% of Twitter’s revenue, have withdrawn.

Earlier this week, CNBC reported that analyst firm Oppenheimer decided to downgrade Tesla’s stock rating from “outperforming” to “performing.” Meanwhile, Elon Musk has sold nearly $40 billion of his Tesla stock to help fund Twitter, as an estimated $1.2 billion interest payment is slated for next year.

“His personality is destroying the Tesla brand”

And the man who loves to create memes and hashtags to make fun of his detractors is now copiously heckled by the Twittersphere. ” His personality is destroying the Tesla brand says Heather, a biotech executive whose Model S lease is coming to an end. More and more Tesla owners are publicly expressing their disapproval. More than a dozen accounts tweeted Tesla order cancellations in response to the billionaire’s tweets.

We were able to interview, on condition of anonymity, three customers whose long-term rental contracts were coming to an end or who were about to take delivery of a Tesla. Their names have been replaced by pseudonyms.

Logan, a renter of a Tesla Model 3, lives in Southern California. He was attracted to the brand because he didn’t want to support the oil industry but also because he really liked the car. But Elon Musk’s behavior since taking the helm of Twitter, including his defense of rapper Kanye West’s anti-Semitic comments, was the breaking point. ”
I don’t want to support any company or person that does this
“Slices Logan.

Tom, a former Tesla investor who owned one and made a down payment for SpaceX’s Starlink satellite internet service, has decided to break away from Elon Musk’s businesses altogether. ”
If he wants to be CEO of a social network, he should really focus on that and ditch that other company
“, he believes.

These Tesla owners are not alone in reacting negatively. The Wall Street Journal reports on a YouGov poll that found car buyers’ views of Tesla have changed dramatically over the past two months. At the start of the year, the automaker had a positive net score of 5.9%, peaking at 6.7% in May. But in November, it fell to 1.4%. 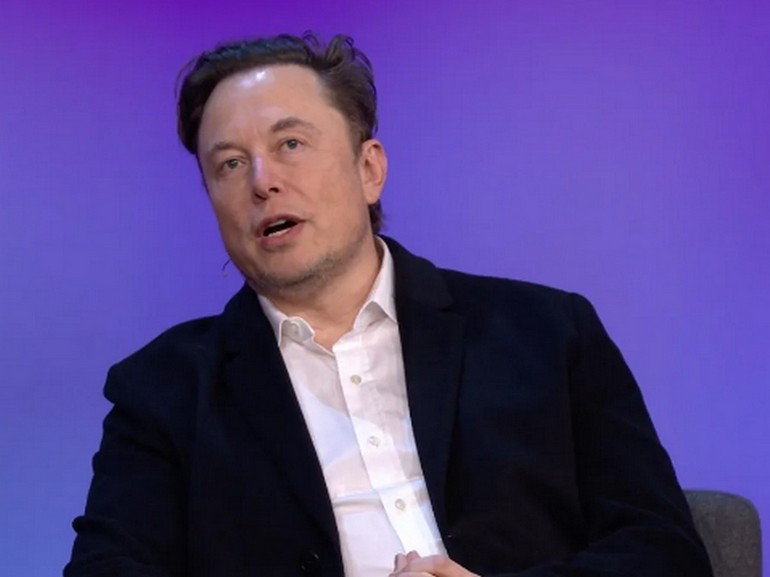 Elon Musk became the richest man in the world mainly thanks to Tesla. CNET.com screenshot

In October, Elon Musk told analysts on an earnings conference call that he expected a ” excellent request » on the end of the year. He added that he expected ”
sell all the cars we make as far into the future as we can see
“. These comments were made a week before he became CEO of Twitter.

However, Tesla’s sales staff seem to be dealing with a different reality. When Logan called to cancel his order for a new car at the end of his lease early next year, the caller offered him nearly $4,000 to keep his order.

In December, Tesla introduced an offer similar to the one made to Logan of $3,750 off the sale price and 10,000 miles of free charging for anyone willing to take delivery of a Model 3 or Model Y before the end of the year.

Heather says she received a call from Tesla around the time Elon Musk took over Twitter, asking if she planned to keep her Model S LLD or trade it in. When she replied that the behavior of the billionaire had repelled her, her interlocutor distanced herself from her CEO, explaining that he did not represent the whole company.

Investors are sounding the alarm

Tesla owners aren’t the only ones upset by Elon Musk’s behavior. A group of Wall Street analysts and investors have been sounding the alarm since the businessman announced his intention to take control of Twitter last April.

When Tesla investor and Motley Fool writer Brian Feroldi called out to Elon Musk to say shareholders were “ concerned that Twitter is taking up too much of your time “, the interested party
defended saying he was coming literally to finish a meeting on Tesla’s production progress in Texas.

Many investors were not convinced. Tesla stock has fallen more than 60% since the start of the year, with the biggest declines coming after Elon Musk announced his plan to take over Twitter and then when he became CEO. And although he said publicly in April that he had no plans to sell any more Tesla stock, he did so throughout the year, for nearly $40 billion.

For Tom, the break with Elon Musk is consummated. He plans to buy an electric car from another brand when his LDD contract expires next year. ” He was someone to look up to “, he says about the big boss. ” Now I’d rather pay more for another company “.