Plastic Omnium is investing in electric cars and unveiling an all-new sensor, directly integrated into the bodywork. As effective as a LiDAR, it is both efficient and very discreet. Elon Musk’s dream is coming true.

Article updated on January 7, 2023: Mobileye, a subsidiary of the American giant Intel, took advantage of CES 2023 to also unveil a high-definition radar (4D radar) which would then make it possible to do without LiDAR as we can read in the press release. Expected arrival in cars by 2025. Enough to do Elon Musk’s business, who does not want LiDAR in his electric cars.

Original article from January 5, 2023 : For many years, car manufacturers and other equipment suppliers have been working on the development of the autonomous car. However, the latter must face many obstacles, such as technology of course, but also regulations. So much so that some brands, like Ford, have decided to throw in the towel and focus on advanced driver aids, without full automation. However, this technology could bring many advantages, starting with the reduction of so-called “ghost” traffic jams. But for that, it is still necessary that the technologies are sufficiently advanced.

Today, there are four main types of sensors for autonomous driving, namely the radar, the camera, the ultrasonic sensors or the LiDAR. In most cases, and especially to reach level 3, they all work together. But it is above all the last that plays a key role, whereasit allows to generate many measures of the environment in a short period of time and that it is very precise. However, it also has some drawbacks.

Indeed, it is quite expensive, which limits its use to the most high-end models, such as the new Volvo EX90 which is equipped with it. And its visual integration is not simple, as can be seen on the Nio ET7. But now a French company could have found a solution to make the autonomous car more accessible and reliable. This is Plastic Omnium, which unveiled its latest innovation at CES in Las Vegas: the 4D Imager radar. 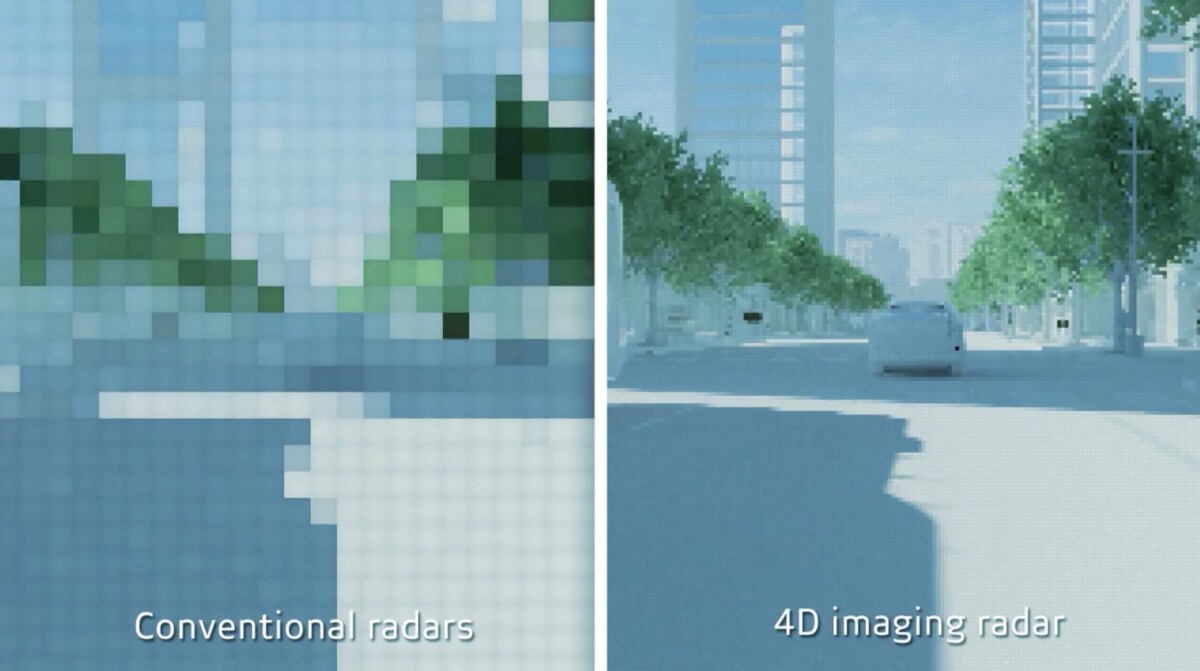 Developed in partnership with the company Greenerwave, it has an interesting feature: it is integrated directly into the bodywork. And more specifically the front bumper, as explained in the company’s press release. And this solution has many advantages, starting with aesthetics. Because if you’ve ever seen a car equipped with a LiDAR, you’ve probably been struck by its rather unsightly presence on the roof.

With this solution, the problem is then solved, since all sensor components are hidden. And this also gives it other advantages, such as better resolution, as well as better capture of information about the environment, thanks to a larger reception area for radar echoes, over the entire bumper. Thus, and unlike LiDAR, its operation is not affected by climatic conditions or light. This considerably improves reliability and reduces the risk of accidents.

In a traditional radar, the antennas are very close to the chipsets (the “heart” of the system, made up of the various chips and various components). Plastic Omnium’s solution is a bit different, since the antennas are separated and distributed everywhere on the bumper. But according to the company, all body panels can potentially be equipped with it if needed, in the future. This technology therefore has many advantages, since it is easier to integrate into vehicles and is scalable. It is then enough to change the size or the number of antennas according to the needs.

Cheaper to repair, thanks to the separation between the chipset and the antennas, this system is also more reliable in the event of an accident. Indeed, if one of the latter is damaged, then the sensor can operate in degraded mode while continuing to fulfill its mission. Able to see far and near, it can also classify objects to build images of complex environments, unlike conventional radars. In addition, its consumption does not exceed 15 watts for its version with six antennas. Thus, its impact on the autonomy of an electric car where it will be installed will be almost nil.

If it looks very promising on paper, it will however be necessary to show a little patience before knowing more. Indeed, the company would aim to start production of the very first copies in 2026 only. It is particularly aimed at premium manufacturers, which means that this technology should be quite expensive, at least in its early stages. Plastic Omnium also specifies that it targets robotaxis, which means that the one Tesla is working on, and which will share its underwear with the future Model 2, could be equipped with it.

We know that Tesla hates LiDARs and has just removed the radars from its electric cars for their dubious effectiveness according to Elon Musk in front of the cameras. But the situation could well change with this type of product.

The Plastic Omnium system is beneficial to safety, helping to reduce the risk of accidents thanks to its greater efficiency. Something to reassure future customers, but also manufacturers, whose liability can now be engaged in the event of a failure. This is also enough to convince the public authorities to lighten the regulations. For the time being, only level 3 autonomous driving is authorized on the roads, but only under certain very specific conditions. The Mercedes EQS and S-Class are the only ones to benefit from this technology, while at Tesla, the FSD (full self-driving) is still in beta test in the United States.

You may have already read or heard about LiDAR, especially on the latest electric cars presented. This technology, still rare in our cars, should be more and more present in the years to…
Read more